5 things to do in Los Angeles for the weekend

Before making any concrete plans, be sure to read my Visit Los Angeles post which will provide you with basic information and travel tips about visiting the City of Angels. If you already decided to visit only the popular highlights, or if you are for some reason short on time, here are my suggestions of 5 things to do in Los Angeles which will optimise your time and make the most out of your LA trip. This could actually be quite a decent example of your »weekend in Los Angeles« itinerary.

I am actually referring to Hollywood & Highland – the heart of Hollywood, which is the most popular intersection and also a shopping complex packed with stores, bars and restaurants. Officially called Hollywood and Highland Center is a complex built around TLC Chinese Theatre, which used to host Academy Awards ceremonies. Today the Chinese Theatre continues to serve the public as a first-run movie theatre. If you are wondering where the Oscars are held – it is actually in the building “next door”, called Dolby Theatre (formerly known as the Kodak Theatre). At the back of Hollywood and Highlands Center you will find a series of viewing bridges on each floor – climb up there and you will see the Hollywood Sign atop Mt Lee. You might be surprised how small it looks from there.

The other, probably most important tourist attraction in this area is the Hollywood Walk of Fame – a sidewalk made up of over 2500 star-shaped pink stones honoring “stars” from movies, music, theatre or even fictional characters. The Walk of Fame stretches over a mile of Hollywood Boulevard on both sides of the street from La Brea Avenue to Gower Street. The biggest cluster of stars is of course in front of the already mentioned buildings.

If you want to visit some museums, Hollywood and Highland has a lot to offer to keep you busy for the entire day: from Hollywood Museum, Hollywood Wax Museum, Guinnes World Records Museum, Ripley’s Believe It or Not Odditorium … just pick what you like and you will have your share of Hollywood for the day. And buy yourself an “Oscar on the go” – there are million souvenir shops on each step of the way.

Tip: this area is also one of the best to stay in, because everything is within the walking distance. Here is my 15€ gift for you: if you book a hotel through this link, we will both earn 15€ for your next hotel booking 😉

Santa Monica is quite different from Hollywood and with its paved squares and bars it looks almost European. While you can enjoy world-class shopping, dining and entertainment in its lovely Downtown, you won’t want to miss a stroll to Santa Monica Pier where you can watch street artists, take a photo of the sign which marks the end of legendary Route 66, or walk down to the wide sandy beach. Being the most popular tourist beach in Los Angeles, Santa Monica Beach has the widest selection of hotels and nightlife within walking distance. If you want to explore Santa Monica more actively, you can rent a bike (take one from the Santa Monica Breeze Bike Share Station ) and take the Marvin Braude Coastal Bike Trail, which runs along the coast from Pacific Palisades in the north to Torrance Beach to the south.

Santa Monica Pier is also the starting point of one of the most popular “celebrity sightseeing” tours: Malibu Stars Homes tour, operated by Starline Tours. Malibu beach is also a sight for sore eyes, especially if you know where to stop. This is why taking a guided tour is highly advised – if you have time, you can come back and enjoy it later on your own.

Trust me, Pink’s Hot Dog is something you HAVE TO try and it will only take you around 30 minutes for this stopover in the corner of La Brea Street and Melrose Avenue. Pink’s has been serving hot dogs since 1939 (they sell over 200 hot dogs and 200 hamburgers a day) and due to its convenient location, it used to be known as a popular spot for established and upcoming movie and TV stars. They even have their own “Pink’s celebrity wall of fame” with over 200 signed photos of celebrities, which started as a place for aspiring actors to hang their photos to be discovered by producers and directors who were known to dine at Pink’s.

Don’t let the lines in front of the kitschy pink colored kiosk intimidate you: average waiting time is around 15 minutes because the staff at Pink’s is very efficient. You can choose from a variety of hot dogs, burgers and some other snacks (very reasonably priced!), most of them are named after celebrities, movies or TV shows, and ALL of them are delicious. They even have one or two veggie choices for those who want to “eat with celebrities” but don’t want to break the oath to the animal kingdom. Pink’s has a number of small tables and every time I was there, I was able to find a sit (because let’s be honest – who eats a hot dog for more than 5 minutes?). By the way, Pink’s now has 15 locations all over the US, including one in the Philippines. And some celebrities still stop by for their favorite dog. So yes, this one is a must!

When speaking of “home to the rich and famous” Beverly Hills is probably the first place that comes to your mind. However, you need to know that celebrities don’t just walk around their houses waving at the tourists passing by, so if you want to do the Beverly Hills properly, I suggest you take one of the guided tours. No point in staring at some garage door if you don’t know who they belong to, right? There are several ways to see Beverly Hills: on a Hop-on Hop-off bus tour (but this one won’t take you to the actual hills), on rented bikes (are you sure you are fit enough to drive all the way to Mulholland drive?), by rented car (just keep in mind that you cannot park or even pull over in the hills at all) or take a guided tour (I took the Hollywood & Movie Star’s homes tour 2 years ago and it was quite a decent experience). You can also hike to the hills where you can find some nice spots with views of the Los Angeles and the Hollywood sign from much closer.

The LA area has around 80 miles of beaches. While Santa Monica Beach is the most popular tourist beach, many others are interesting too – each for its own reason. Venice Beach for example with its Venice Beach Boardwalk – a one-mile street market and free speech zone on the paved two-mile Ocean Front Walk on Venice Beach – is the place where locals (and tourists) want to show off their muscles and shaped up asses in their tiny bikinis. If you only have limited time, start at the iconic “Venice” sign at Windward Avenue because you can see most of the attractions within two blocks north and south of this point. While you are not allowed to ride a bike on the Boardwalk, you can still take the Venice Beach Bike Path, which runs parallel. Another place to observe the muscles is the Venice Beach Skate Park and Muscle Beach area with its Outdoor Gym (Mr Terminator supposedly spent a great share of time here). If you happen to be in Los Angeles on the 4th of July you can even witness the Mr. & Ms. Muscle Beach Contest. 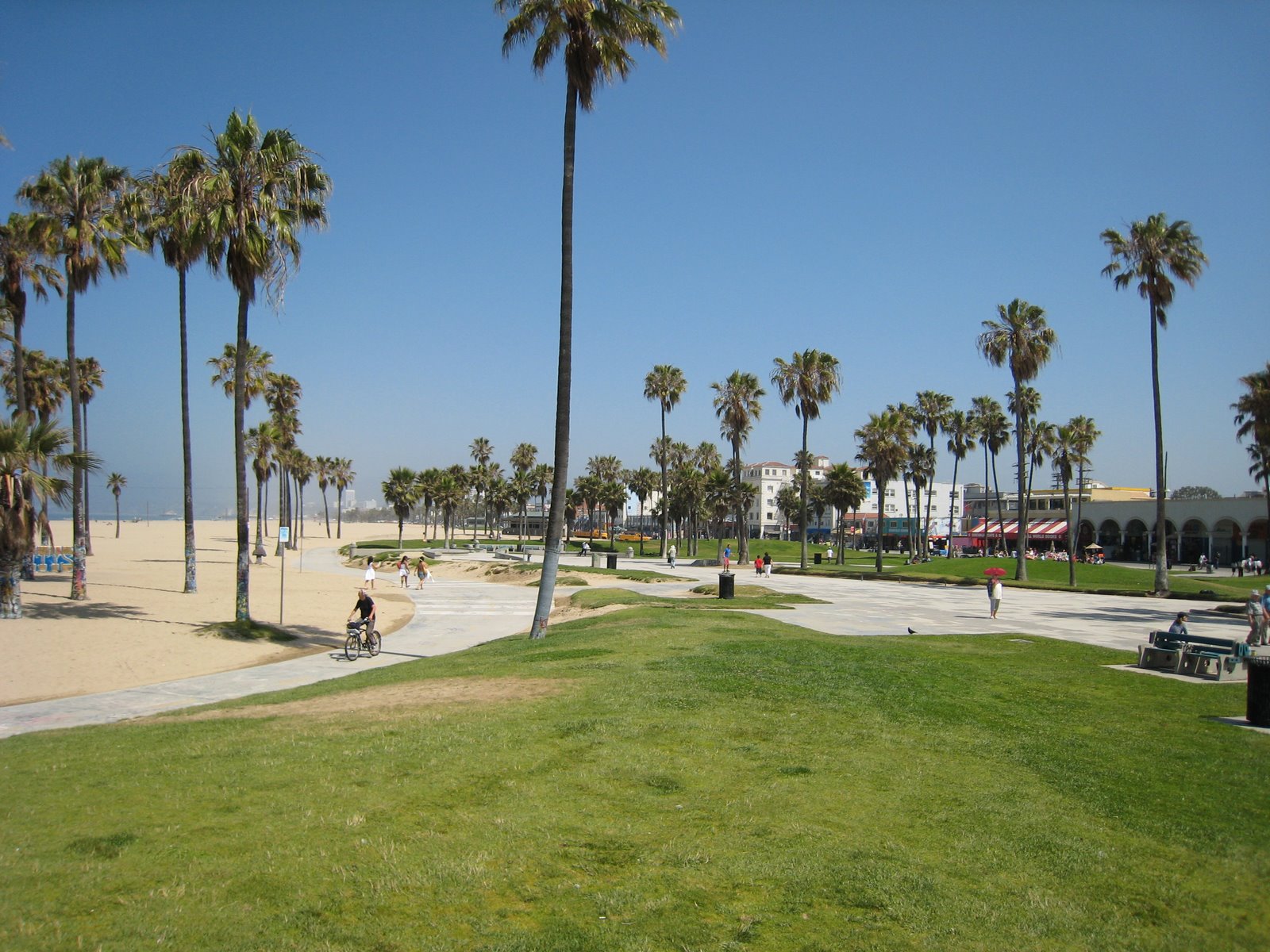 If showing off or staring at people showing off is not your thing, you can always pick one of the South Bay Beach Cities (like Manhattan, Redondo or Hermosa Beach) which are popular with surfers and have more “cozy beach town” vibes.

This is it, very briefly. If I had to squeeze all these top spots into a weekend, I would do it like this:

You can see some of my Los Angeles photos in my Facebook album. Of course, you are kindly invited to like my Facebook and Instagram profile, where I regularly publish new photos, posts and travel tips. And scroll down for comments, what would be your perfect LA weekend plan?

5 things to see in Boston, Massachusetts

5 things to do near Makarska Riviera (day trips)

North Atlantic coast with a spice of Canada